Content Marketing for Pros: What Contractors & Installers Want From Manufacturers

This episode is an exploration of the professional installer and trade industry and what they want from building materials manufacturers. Plus, what does the future of the trades look like? And how can manufacturers ensure that their future is a little brighter?

Chad Lingafelt is the managing partner of Loc-Doc Security, a door and security firm in North Carolina. Chad is also the host of a great podcast, The Coffee Break. He’s a man of several passions, and we talked with him about how building product companies can stay relevant in the ever-evolving construction and manufacturing industry.

Chad joined the security profession back in 2004, after trying to make a career in radio happen. He’d been investing quite a bit of time and energy into the world of radio, so he explored the idea of a job where he just clocked in and out. “I had spent a few years out of high school in the radio industry, and I actually enjoyed that a lot,” he says. “But I just kind of hit a dead end with it ... I’d also felt like I had taken on more than I could handle.”

“And an opportunity came available to get into the locksmith industry and I said, man, this is gonna be awesome. I can just show up, do my job and leave,” says Chad.

But the world of security drew him in — he started to get more involved in his job, taking on different roles and projects. “I joined in the security industry in 2004 as a rookie technician, and I helped to work and grow a business … I moved into ownership a few years ago,” says Chad. “[I’m] just having a blast trying to build and grow something.” 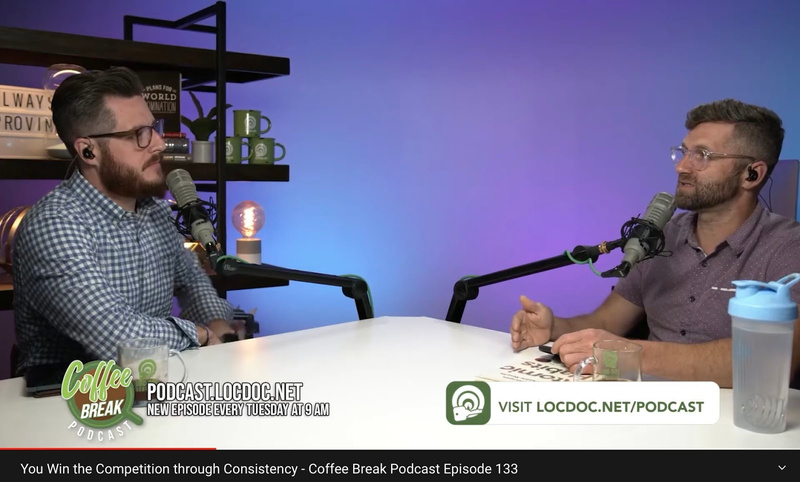 As Chad took on more responsibility in his company, he’s focused on growing it through business development and partnerships. These kinds of relationships have kept his company relevant in the trade industry and successful as a business. (And it’s given Chad quite a few things to talk about on Loc-Doc Security’s podcast, The Coffee Break.)

“So as a company that is a trade company, you know, we're very selective about who we work with, especially in the security world, because there's a lot of different products,” he says. He says the best fit for partners are those who are pushing boundaries in the industry and truly innovating in their field.

“Maybe it's the way that the business grew, but there kind of gets to a point where you rest on your laurels or you become a little complacent. And so I like to align with people that are constantly, I guess challenging that complacency, challenging the status quo to continue to grow and be innovative,” Chad says.

Some of those companies are changing (and improving) how people do business in the security industry. “In our industry, Brivo does a fantastic job,” he says. “And you know, even inside of the Brivo world, there's a company called Eagle Eye, that's really, they still kind of operate like a startup in the security manufacturing world. And so they're just constantly throwing new kind of data analytics stuff out for video, which is really cool.”

Chad keeps an eye on what these brands are developing and the impact that creates in the world of security. “And so having some industry leaders that are going to constantly reinvigorate new ideas into the industry is a big benefit for everybody,” says Chad.

How to Market to the Pro

For manufacturers who want to work with a firm like Chad’s, he’s looking for a few key benefits — the main one being that the partnership comes with marketing support, “because especially in the trades world, tradespeople are not typically the best at marketing themselves,” he says.

“And so people [who] can help point you in the right direction to help market, or at least give you suggestions or support you in that aspect are also very beneficial,” explains Chad.

Manufacturers should also consider how their brand is perceived across other channels, and what it’s providing to the professionals and tradespeople it partners with. The potential for partnership could translate to a more sustainable and successful business. “Our relationships are not solely related to leads,” says Chad.

Some manufacturers take the relationship with tradespeople further than lead generation. “One manufacturer that we work with developed a business development group for our trade,” explains Chad.

Chad’s company hadn’t been a client of theirs at any point, but this manufacturer wanted to connect with Loc-Doc. “And we became a part of it before we were ever a customer, they invited us in — and this was years ago, years ago, when we were a significantly smaller company — and said, we see something in your company and we want to help to mentor you, essentially, in growing your business. And that has translated into a lifetime partnership.”

The successes weren’t immediate, of course. The manufacturer invested about two years in Loc-Doc before seeing that payoff. “But our business in the last five years won two significant awards within the organization, hitting record sales numbers for their organization,” explains Chad. “Basically, we created two categories of sales targets, based off of the fact we came in as a $0 client, and we set two seven-figure records.”

The manufacturer took a chance on Chad and Loc-Doc Security, which was a small business at the time. “But I'll tell you what we did have, we met at a trade show, originally, and the guy that met us saw something different,” says Chad.

How To Build Strategic Partnerships With Trades Today

So what’s the biggest challenge tradespeople and installers are dealing with today that most manufacturers aren't even aware of? How can manufacturers support the trade industry and build their company’s business at the same time? For Chad, he thinks that whatever manufacturers can do to support the end-user is going to matter most.

But manufacturers need to help the installers understand the problems and solutions that end-users want to know about.

“My biggest pet peeve from a manufacturing standpoint is that manufacturers are marketing to installers. They're not marketing to the end-user,” explains Chad. “So they're pitching their product to me as a tradesperson, this is the facts and the features and all this stuff. And that's great and they spend lots of money marketing that product to us, but it doesn't actually get to the end-user.”

Chad stresses that manufacturers need to help their installers and professional customers tell the right story so that the end-user understands the solution that the manufacturer’s product can provide.

In other words, if you sell decks, the end-user wants to know it’s going to be low-maintenance … not that it’s easy to install. “[T]hat's what, as a consumer in that situation, I would be looking for. How to get a very reliable deck that I don't have to maintain or something like that,” says Chad. But tradespeople need the right content and information from the manufacturer, to communicate that to the end-user.

The manufacturer who understands how to engage their audiences with the right content marketing recipe of installation videos, how-to guides and lookbooks is on track for more success.

“Consumers are becoming more and more educated, more and more aware, and they know what they're looking for. And they're gonna find somebody to help them get it,” explains Chad. It’s not about selling a product — it’s about building trust with the customer and working towards a solution.

For more insights on how product manufacturers can build stronger relationships with customers and partnerships that last for the long term, check out Loc-Doc Security’s podcast, The Coffee Break, or their YouTube channel.

Be sure to go to our podcast page for more great content and all of our interviews.