According to our recent survey, the majority of Building Materials Manufacturers market to at least 4 different channels. Creating a Twitter Strategy for your brand that appeals to every channel you’re trying to reach can be quite a challenge.

So instead of speculating, I went straight to the source. I read hundreds (possibly thousands) of tweets from Twitter accounts across the building materials industry. I looked specifically for Building Materials Manufacturers on Twitter with:

Based on my findings, here are 5 key things that building materials companies are doing to build a successful Twitter presence and engaged followers.

Quick Definition: User Generated Content (UGC) - Content that is creating by your customers around your brand or marketing strategy. Companies then take that content and compile it to add to/strengthen their marketing strategy and build loyalty with customers.

Quick Example: We’ve all seen our friends posting and tweeting pictures of their coke bottles that say “Share a Coke with …” These posts and tweets are a great example of UGC working for Coca-Cola.

Sherwin-Williams (@SherwinWilliams) uses content from tweets their customers tag with #SWColorLove. This keeps their audience engaged and allows Sherwin Williams to showcase their products without being overly salesy.

They repost pictures that real customers have posted of their painting projects. Using real-life examples gives their tweets a human touch. 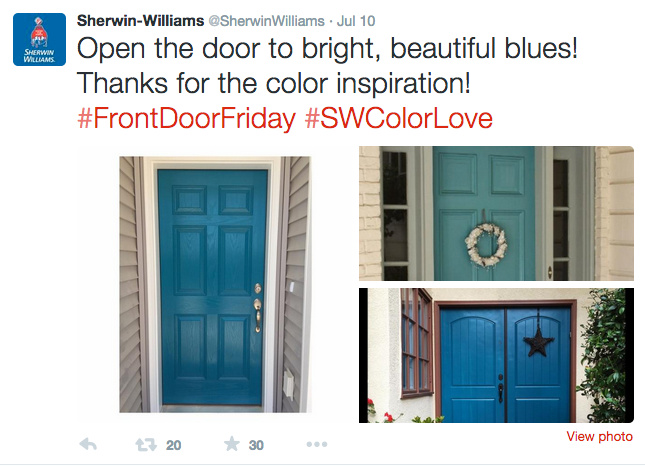 Benjamin Moore (@BenjaminMoore) does occasionally showcase customer’s work, but it tends to be professional bloggers and/or designers that share their staged photos.

They typically stick to posting content from industry experts rather than everyday customers. They share photos of other experts’ painting projects, but the photos are always professional quality and perfectly staged.

While there’s nothing wrong with a well-styled photo, in the comparison below you can see how Sherwin-Williams has a more natural feel than Benjamin Moore. 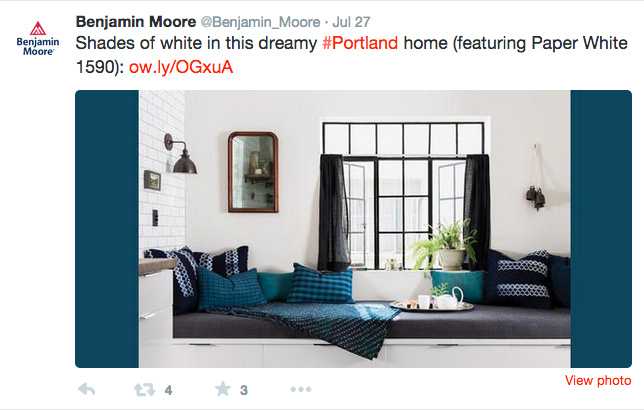 How to Use UGC Successfully

User Generated Content is a powerful way to actively-engage with what your customers are saying about you, and leverage their positive feedback to win more customers without pushing your product too hard.

But, it’s not just as easy as sitting back and letting customers post away on your newsfeed or tagging their pictures with hashtags.

There are of course several different strategies for making the most out of UGC. Here’s a rough list of To Do’s to implement the same UGC strategy that Sherwin Williams is using:

Images can increase click-through rates by 18%, but it’s important that your images have the right feel for your brand.

Most companies think that pictures from their latest magazine ad will work as well in tweets as they do in print. However, Twitter followers respond better to real life snapshots from your friend’s kitchen than ad-style photos.

Cambria Quartz (@CambriaQuartz) uses the perfect balance of great photography with a natural, homey feel. Their photos showcase their beautiful countertops, but in a way that makes their products seem attainable instead of out of reach. The messaging is focused on spurring casual conversations. 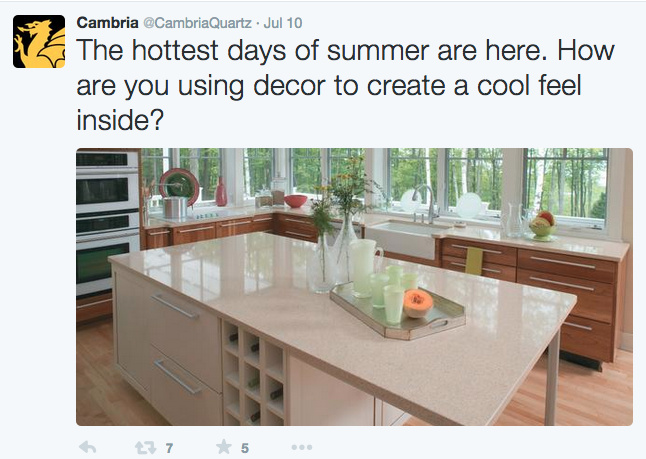 In comparison, Caesarstone USA, @CaesarstoneUSA, is also a quartz countertop that highlights its design and practicality in their posts. But, even though they have over three times as many followers as Cambria Quartz, their engagement is much less across the board.

Caesarstone suffers from a similar problem as Benjamin Moore. They highlight their product in a way that feels unrealistic and staged.

Cambria and Caesarstone post almost the exact same ratio of tweets with images, videos, text, and retweets. However, Cambria Quartz is more successful at capturing the attention of their followers. Kohler (@Kohler) created an event within an event at Bonnaroo Music and ARts Festival to take reach Millennials in a unique way.

They created 10 shower locations with 400 total showers for the four day event. Each shower was outfitted with Kohler showerheads, Kohler shower curtains, floor mats, and custom artwork. Their efforts brought clean showers to over 80,000 people while conserving thousands of gallons of water.

They used the hashtag #KohlerShowerParty to engage with festival goers by offering discounted showers and giveaways. Their social media strategy worked big time:

They saw a 1,000% boost in retweets and favorites during the #KohlerShowerParty campaign. 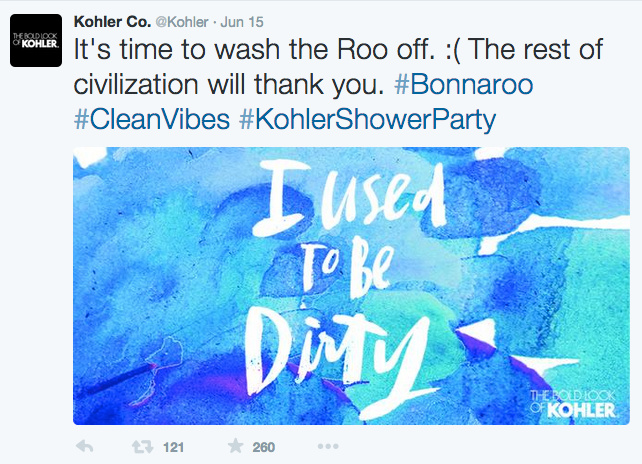 Here’s an example of engagement over followers:

GAF Roofing (@GAFRoofing) has over 10,000 followers. They post regularly but lack engagement with their posts. On the other hand, GROHE (@GROHE) has fewer followers, 9,300, but their engagement with followers is much better than GAF. GROHE utilizes their account to showcase their products when they are being used by interior designers or architects. 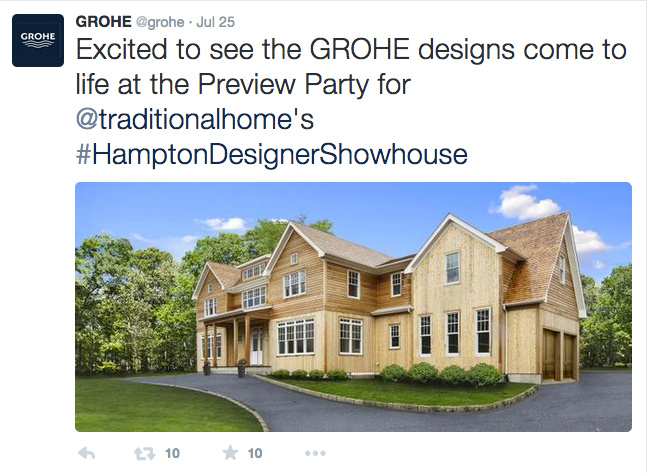 One contribution to GROHE’s sustained engagement is their utilization of hashtags and mentions within their posts. This broadens the possible spectrum of impressions and exposures.

Twitter chats are a great way to connect with other professionals in your industry, make connections, share ideas and get a great deal of exposure in a short amount of time.

Bosch Appliances USA, @BoschAppliances, participates in a weekly Kitchen & Bath Chat called KBtribechat (#KBTribeChat) to promote their innovative brand. This chat has a following of 18,700 professionals and businesses from the kitchen and bath industry.

Bosch is a great example of how to participate in a Twitter chat, without blatantly promoting your products:

They showcase their products through images that point out the unique features, but they don’t tag the image or product with their logo. It is up to the viewer to deduce that it is, in fact, a Bosch product. This strategy allows them to promote their products in an organic (rather than overbearing) manner, and it works! Bosch Appliances normally doubles their engagement when they tweet during #KBtribechat. Did you know 71% of tweets are ignored by followers?

If you take a look back at these strategies, they all have a common thread - each strategy makes your Twitter presence feel more and more human

Sure, creating an online presence that looks and feels genuine takes more time, but it also brings in more sales.

Lowe's is a Social Media trailblazer in the home improvement industry. In this infographic we show how they used a brand new social media channel to win users across multiple platforms, including Facebook which hosts their target demographic.

If it's done right, a Twitter contest can lead to long-term loyalty from its participants (even if they don't win). If it's done wrong, even the winner can walk away annoyed at a brand's over-tweeting, over-promoting and overly-complicated contest.