If you’re looking to launch a product or just want to know how to win more business, this episode is for you.

Jonah Lupton joins the show to discuss how building material manufacturers can disrupt the industry with innovation and new product development.

In this episode, Zach and Beth talk to Jonah Lupton about the launch of his soundproof paint, SoundGuard, and the successes and failures of being a start-up in the building materials industry.

Four years ago, Jonah Lupton ran a software company while living in a townhouse with shared walls. When he approached his landlord for soundproofing options, he learned it would come with a $5,000 price tag and simply wasn’t feasible.

The issue continued to nag at Jonah until he decided to create his own solution. After partnering with a lab to create the formula, he has recently launched SoundsGuard, a latex-based soundproofing paint. 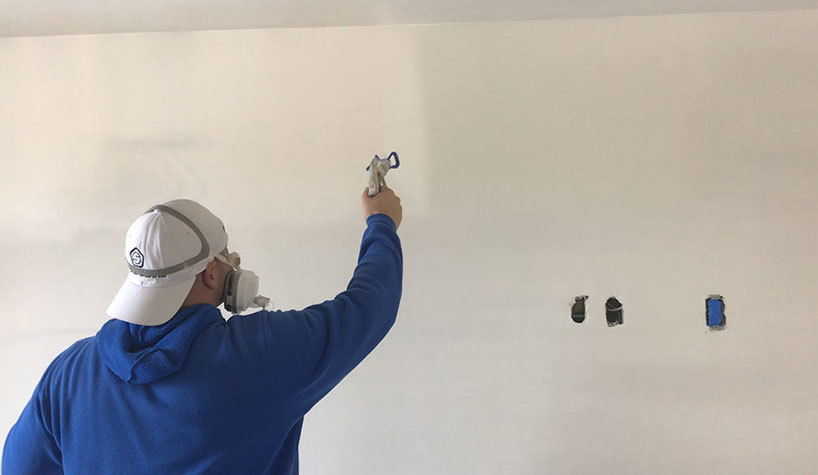 It’s applied to shared walls between hotel rooms, apartment units, bedrooms, and condos. With just the thickness of a credit card, users see an 8 to 10 decibel reduction.

How to Change Industry Perception

There are very few startups in the building material industry, which has been a major hurdle for Jonah. Most of the product innovation comes from major companies with large R&D departments.

Now that SoundGuard has launched, Jonah has partnered with some of those major players, including earning recent approval as an approved vendor with both PBG and Sherwin Williams.

When he first created the product, Jonah had independent testing performed with acoustic experts. He determined the easiest market to penetrate would be the hotel industry with a focus on upcoming renovations. Because of the cost of the product, Jonah decides to target the top 25 to 30% of the nation’s 60,000 hotels. These premium hotels typically charge $200+ a night.

One of the major challenges to overcome is that hotel owners can only rationalize using the product when they’re renovating, which is every 8 to10 years. If the SoundGuard team misses this opportunity, it’s a long time to wait. With thousands of hotels renovating every year; Jonah notes the importance of identifying these hotels in advance and get to the decision makers while they still have time and budget left.

The process starts with doing a mock-up in the actual hotel by taking two rooms out of inventory. Jonah or an acoustical consultant test the walls before SoundGuard is applied, then test again afterwards. They record the data and provide a summary report for the management team with the results.

Recently, Jonah did this type of demo for a project in Charlotte with Marriott Corporate. They hired their own acoustical consultant and will re-test the acoustic numbers after the product has fully cured within 30 days. If the right numbers are hit, Soundguard will be able to do business with Marriott for both future renovations and new construction.

Jonah’s process of overcoming objections is explaining the product while in action. It’s crucial to demonstrate the before and after to decision makers. For larger renovations, the hotel may have an A&D firm involved or their own acoustical consultant.

At the Austin Omni, Jonah worked with the director of engineering. It’s an older hotel and noise complaints have been an issue, but it would be cost-prohibitive to tear out existing walls in 300 rooms.

As a non-invasive solution, Jonah executed a mock-up to prove how well the product works. He and the Omni team sat in a hotel room and played a podcast at 85 to 90 decibels to mimic a loud conversation. Then they went to the room next door and could clearly hear the noise in the other room.

A hired contractor then applied the SoudGuard product to both sides. The next day, they did the exact same demo with the podcast. In the room next door, Jonah and the Omni team couldn’t hear anything at all. The director of engineering insisted on checking to make sure the speakers hadn’t turned off. But as soon as they opened the door to the hallway, he was shocked to hear the podcast still playing.

As a result of that demo, the Omni design team put SoundGuard in the specifications for their upcoming renovation.

How to Reach Companies with a New Product

Since SoundGuard is a completely new product vertical, Jonah notes that no one is looking for them - they have to go out and find customers. So far, marketing and customer acquisition has been done on a limited budget as the team continues to close more deals and raise more investor money

In the future, trade shows will be a big impact once they start doing them. For now, SoundGuard has focused on cold calling and emailing. They tried paid search, but mostly got results in the consumer space, which isn’t their target audience. Executives aren’t on Google - they’re calling experts. Jonah’s strategy is to reach out to the spheres of influence for these industries. They’re able to get in because SoundGuard isn’t competing with existing products like Sherwin Williams and PBG.

How to Launch New Products + Landing Your First Gig

Jonah officially launched SoundGuard 1.5 years ago. He had field test results and built a website with virtually no capital. Because most of his budget went to R&D, he thought the cheapest way to launch would be through independent sales reps. It wound up being somewhat of a mistake because they sell a broad range of products and you get just a small portion of their time.

Another challenge was the long sales cycle, which caused the reps to lose interest and motivation very quickly. After five or six months, Jonah realized it wasn’t working well, so he started raising capital. There aren’t many startups in the building materials industry, which means there aren’t a lot of investors.

Even though it’s a unique product, most angel investors have made their money in technology, healthcare, or consumer products so that’s what they stick to. He had a hard time raising capital but eventually raised his first $100,000 from a real estate developer in Boston. That helped to hire people and Jonah continued raising capital, reaching $450,000.

He was recently invited to a building materials accelerator in Silicon Valley called Plug and Play, which is sponsored by about 8 to 10 big companies like Sherwin Williams. Jonah will go to pitch his concept to hopefully become one of the start-ups selected for the accelerator. He’ll also have one-on-one meetings with each of the program sponsors.

His goal is to raise money and finish out SoundGuard’s $1 million seed round. Then he can build the team, increase marketing, and do more trade shows.

Jonah realizes now that one of the biggest mistakes in the beginning was not doing lab tests soon enough. Lab test results are the only way to get specified into big projects. He initially thought hotel renovations would be low-hanging fruit if they could identify the projects in time and do an on-site mock-up.

The challenge has actually been the strength of the economy. Several renovation projects have been postponed until the economy slows down because hotel revenues are too high right now. Even with the budget to do a renovation, hotels want occupancy rates to dip down in the 70s before they take rooms off the market.

As a result, Jonah has placed SoundGuard’s focus on new construction while waiting, but there’s no chance of getting in without lab results.

Advice for New Launches for All Companies

Jonah recommends really figuring out your best customer, as well as who helps that customer make purchase decisions. In Jonah’s world, contractors are not part of the decision making process. Instead, it comes down to architects, designers, and acoustical consultants.

Initially, Jonah also thought getting a hotel general manager on board was crucial to success. But in reality, the property owner doesn’t care what they think.

Jonah also recommends being as realistic as possible about the expense of a new product launch. He had a sales team on the payroll for months before they came close to getting a deal. His initial projections of $100,000 in revenue in 100 days was far too optimistic. The sales cycle wound up being 18 months to two years - much longer than Jonah expected.

As a result, he trimmed down the sales team and plans to rebuild it with different people who have stronger connections with architects and designers. Ultimately, it’s about breaking in and getting people to think about paint in a different way with sound performance, not just aesthetics.

Want to contact Jonah? Reach him at [email protected] and learn more about his product at Soundguard.io. He also answers the website’s live chat.

How To Sell To Builders

When you’re selling building materials, you know you need to get your product in front of the right people. Following these strategies can help you nurture new leads, make your first sales and create customer relationships that last.

An Introduction to Online Ads for Building Materials Manu...

Despite the obvious benefits, the complexity of the world of online ads leads many Building Materials Manufacturers to drop out of the race. We’re here to demystify online ads so that you can get ahead of the game: building leads online and outperforming your competition.